The last few years’ headlines news for the Island of Koh Phangan has been that Kan Airlines are building an airport on the Island. Most people thought at the early stages it was all just hype to encourage growth to the island, others thought no it will never happen. Two years later and it’s back in the news again and this time we are being told that the first flight will take off from this island some time at the end of this year. Recently published in the Bangkok Post Kan Airlines eyes Koh Phangan They said year 2014 they are saying the airport will be complete by September 2014! Well we now well into 2015. They are saying that the airport at the moment is at 70% completion, we are yet to see some photos to prove this and most the photos floating around the internet are only showing excavated land.

Somphong Sooksanguan who is the founder of Kan Airlines and the main investor into the airport has said the first flight will take off at the end of this year. They say that the passenger terminal is well underway with a conceptual design that molds with the natural tropical landscape and it will have a view towards the sea.
The construction of the Phangan Airport has already cost 500 million Baht which will easily reach 1 billion by the time it’s finished. Kan Airlines will be obviously the first airline to serve Koh Phangan offering routes to Bangkok, Chiang Mai, Phuket and Krabi.
Kan Airline already has a large fleet of small propeller planes but they will be investing in two new 70 seated ATR 72 turboprops for Koh Phangan. Other routes are planned and the airport will also be open to other airlines.

The reality of the project has already set changes to the Islands economy with Makro shopping center now opened and Tesco expansion with its KFC and Big C supermarket which opened last year. There are talks of a few new luxury resorts being built on the East coast of Koh Phangan. Other projects that are well underway in the Thong Nai Pan area with new villa projects and resorts. So even before the airport is finished it is creating economic expansion across the Island like its big sister Island Koh Samui.
Tourism would obviously pick up with direct flights from Bangkok and Fullmoon parties are going to be easier to get too. You could probably expect to find in Travel agencies doing package deal flights to the full moon party like they do for the Island Ibiza and its mega parties. The airport is beginning to look like it is set and its progress through the business man’s eyes, but for the little Paradise Island that we all love, times are changing for the good or the bad!

When it will be completed nobody knows and top newspapers have stated dates to create excitement, but until we can actually board a plane on Phangan we cant trust anybody saying it will be open very soon. 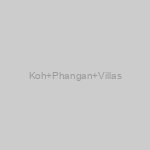